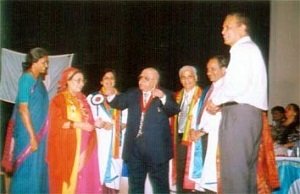 Some of the outstanding work done through this Dept. was done under the guidance of late Dr BEHRAMSHAH D PITHAVALA, renowned Zoroastrian religious scholar and astrologer.
SHRI GANESHAYE NAMAH
OUR SOCIETY’S VICE-PRESIDENT
GANESHA BEJAN DARUWALLA 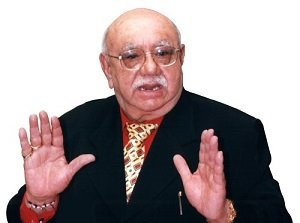 The world-renowned, revered astrologer and prophesier Shri Bejan Daruwalla is not someone who needs a lyrical and eloquent introduction. His name and his illustrious line of work speak well enough for him. Born on 11th July, 1931, Bejanji is an ardent devotee of Lord Ganesha even though he hails from a Parsi (Zoroastrian) background.

Loving and kind-hearted, Bejanji has won numerous accolades and widespread recognition for his unerring predictions. Naturally gifted with a spectacular intuitive prowess, he listens to and relies on his inner voice, and seeks Ganesha's blessings to foresee and predict.

Bejanji has been closely associated with a number of newspapers, magazines, television channels and publishing houses all over the world. He is the brand ambassador and force behind India's No. 1 astrological website – GaneshaSpeaks.com, on whom he officially conferred his astrological legacy.

Bejanji's achievements and accuracy have been appreciated and acknowledged by many. Bharat Nirman, an All India organization that promotes and takes up constructive program in all walks of life, awarded him the title of "The Astrologer of the Millennium" on August 27, 2000.

Also, the Federation of Indian Astrologers has awarded him the highest degree of Vedic Astrology – Jyotishi Mahahopadhyaya, whilst The Russian Society of Astrologers of St. Petersburg had conferred on him the Best Astrologer of 2009 award, at the Russian Centre for Science and Culture 23rd World Congress organised by the All India Shah Behram Baug Society (for Scientific & Educational Research) / Zoroastrian College of which he is Vice-President. However, he considers the highest and the most precious reward and award to be the love and affection that his followers shower upon him, and Ganesha's blessings that have always enabled him to predict correctly.

His books have been translated into other languages. About RUSSIA he writes: I had said in my 2011 book (First Russian edition) that there will be a total change in the mindset, politics and economy of Russia on or before 20 December 2017. 12 June 1990 saw the declaration of the Russian Socialist Republic.

November 1917 is the official birth chart of Russia. If I combine all of it, the signs of Gemini, Scorpio, Aquarius have a great impact on Russia. Around June 2048 is the period of the greatest glory and grandeur of Russia. Russia will be completely reunited.

His forecast about India - and Politics and Politicians: In his book 2014 Horoscope at page 538 and other pages, he writes about Narendra Modi:


“He is born to crack the whip in the circus of politics. It is in his genes. If Narendra can control Politicians and organise successfully he will be a winner. Whether he will be the Prime Minister or not is a different issue. Narendra’s method is luck + intelligence. The basic quest of Narendra is to tame the Politicians, organise efficiently, and also nourish the poor and the week. It is quite a poser. To me that is his real challenge. My final comment is – he is a good Politician. He has the makings of a great leader. His tarot card no. is 17 – that has a connection with our Aquarian Age. That’s a very big deal. May Ganesha Bless him.

In his book 2014 Horoscope, at page 527 in his section on WORLD HOROSCOPE, he has written about the good future for both India and Iran.

He was the “guru” of all astrologers. A self taught man he discovered a NEW SYSTEM within astrology. He was a deeply well read person well versed in all methods of astrology. His magnum opus book” IN SEARCH OF DIVINE LIGHT” has run into 3 editions. He was very knowledgeable about Zoroastrian religion, and he taught and passed on his knowledge and books to his spiritual heir SBBS President. He became Vice President of the Society in 1984 and remained so till he passed away in 2004. COSMIC ECOLOGY OF MAN ON EARTH WITH THE UNIVERSE. (E) ANCIENT COSMIC WISDOM – SPIRITUAL STUDIES DEPARTMENT INCLUDING ASTRONOMY, ASTROLOGY AND OCCULT SCIENCES – More Information This is the most important of all the five departments of the Zoroastrian College. The main work of this department is to prepare the people of many countries of the world, spiritually, for the ADVENT of SHAH BEHRAM VARZAVAND SAHEB the RAINIDAR SAHEB, Prince of Peace of the Aquarian Age, whose spiritual rulership in public on Earth is expected within the next few years. 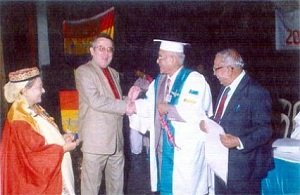 Picture shows – L-R: Z.C President with Consul for the Republic of Poland, Hon. Mr. Marek A. Moron with Dr. R.N Shukla and Justice Shamsuddin at Convocation Ceremony of January 2004.
The level of spiritual awareness is not only heightened through the occult sciences such as astrology, palmistry, rammal, phrenology, pendulum dousing and studies of the mystic sciences of the cosmic laws, but also people are encouraged towards moral righteousness as a code of conduct for life.
The true aim of education is to draw out the latent abilities of every person and develop the personality so that the individual becomes a good human being of good character. GOOD THOUGHTS, GOOD WORDS, GOOD DEEDS.
The Zoroastrian College is endeavoring to do this through its RESIDENTIAL RESEARCH CENTRE at Sanjan, India, where people from many countries of the World can come and stay, practise the spiritual disciplines, develop spiritually their latent powers, and then go to the different countries of the World and set up their own centres. In this way, a network of spiritual centres in many countries would help to develop the level of Humanity on Earth; so that the cultural backgrounds of people of different ethnic origins are respected, and preserved; PEACE is brought about and established amongst the people of different religions and ethnic backgrounds instead of war and destruction.
In the long run this is the surest and soundest method for developing the education, preserving the culture and increasing the research co-operation amongst people of all countries, in a spirit of tolerance and understanding.